Dorathy Bachor has taken to social media and thrown a shot at a unanimous person.

The first runner-up of the Big Brother Naija season five reality show took to her official Twitter handle to throw a shot at someone who does not seem to like her.

Dorathy Bachor, who recently took to social media and hit back at her critics by telling them their opinions will never change her, explained that the person did not care about her before and does not care now, but all they have is hatred whenever they hear her name in the news.

The tweet received mix-reactions from many social media users.

Taking to her Twitter handle, the well-endowed reality star wrote;

“They didn’t care about you then and they still don’t now. They just hate that everywhere they turn, they keep hearing your name ???????? #SayNoToExCrushes” 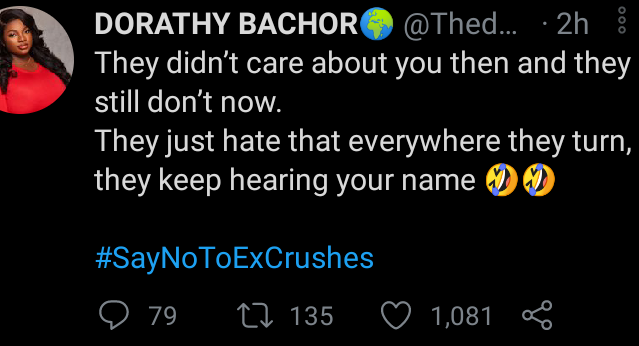